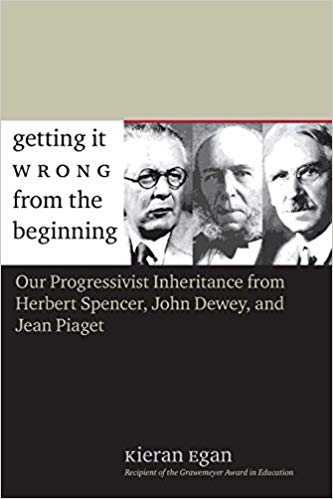 Just read a fascinating book about ed history:  Getting it Wrong from the Beginning, by Kieran Egan.  “Ah, an autobiographical work!” one of Egan’s colleagues quipped on hearing the title.  I found this book online somewhere, and quickly ordered it as part of my ongoing quest to understand the thinkers and the thoughts that have shaped modern education.  With Egan’s book, I wasn’t disappointed.

I’ve only read through it quickly, and I’m still digesting it, but I have a feeling I’ll be going back to it for a reread fairly soon.  It’s profound.

There are three men on the cover, one of whom is not particularly famous.  The other two men, Jean Piaget and especially John Dewey, are. They are revered by educators, and it was largely the promise of reading about Dewey that caused me to buy this book.

But it’s the third man on the cover, little known by most teachers and never, to my knowledge, mentioned once to me during my Master’s program, who Egan believes has shaped modern education more than anyone else.  That man is Herbert Spencer. I’d never heard of him before.

Egan maintains that Spencer, who died in 1902, not only anticipated the work on John Dewey, but profoundly shaped both Dewey and the early 20th Century movement of progressive education, which Egan believes is still the dominant influence on American classrooms.

1) It is Spencer’s theories, not Dewey’s or Piaget’s, that are really central to understanding American education.

2)  People don’t realize this because Spencer published some seriously regrettable thoughts right alongside the good ones.

Spencer, once immensely influential in a wide variety of fields including both education and biology (it was he, not his contemporary Darwin, who coined the phrase “survival of the fittest”) fell out of favor because of his support for the “reasoned savagery” or “brutal racism” (as Egan puts it) of his social Darwinistic beliefs (which one author says would be better termed as “social Spencerism”).  In fact, Spencer was against the idea of public schools altogether.

This is contrasted with the work of Dewey, who favored the use of public schools to create a more just society and to further democratic ideals.  Dewey’s ideas were far more attractive to the reformers of the early 20th Century, and it was his name, not Spencer’s, which endured — even though, Egan suggests, much of Dewey was merely an echo of Spencer.

3)  The problem is, Spencer’s influence, put into practice by the Progressive reformers of the early 1900s, and hugely influential to this day — is damaging to education.

The Problem with Spencer’s Influence

Egan’s book is part resurrection of Herbert Spencer, and part critique of his influence on progressive education, which Egan defines as “a belief in attending to the nature of the child” based on what Egan considers erroneous notions of psychology.  Egan writes:

“Progressivist practices have usually been promoted on the grounds that if only teachers will attend to the new knowledge gained by research about learning or development and follow what the research implies . . .  an educational revolution will occur.”

Unfortunately, “the promised revolution consistently fails to occur” and, for Egan, wave after wave of progressive educator is left to explain why previous reforms failed to fully implement progressive ideas fully enough.  But the problem, for Egan, lies not in the implementation, but in the core of the movement, traceable back to Spencer’s ideas.

Basically, Egan says that Spencer’s belief are the ones that pretty much all of us have nowadays.  Spencer criticized school learning as dry, boring, and irrelevant, filled with “inert facts” and both ornamental (not useful) and largely ineffective.

Spencer contrasted this learning process with the way young children learn outside of school — easily, naturally, pleasurably.  We should make all education look like this: active, hands-on, appealing to the inner nature of each child, somehow adhering to that early, apparently easily learning process of childhood.  If we could just learn to do this, writes Spencer, we’ll unlock the key to making learning not only effective, but natural and even pleasurable. It’s not hard to see that this belief is latent . . .  everywhere today. And Egan does a great job of showing how Spencer really got there first in his writings.

An example would be the way Spencer believed that math principles should be taught first experimentally, using marbles, allowing students to formulate real problems based on authentic situations and interest, and only from there to derive intellectual principles such as addition or multiplication.  Or students should be allowed to wander the woods, as Spencer used to allow with his friends’ children, collecting types of butterflies and bugs, and moving only the abstract — classification, biological study — only after developing interest in the concrete.

In a way, we’ve been haunted by Spencer’s theories ever since.  Everytime you hear someone talk about “relevance” or “hands-on learning” or “learning by doing” or “authentic projects” or “child-centered” education — they’re echoing Herbert Spencer.

What’s fascinating is that these very old ideas are still considered “progressive.” Spencer traces out how not just the Dewey-inspired reformers of the 1920s and 30s, but the more radical reformers of the 1960s, and even the proponents of very modern reforms (Egan, writing in 2002, cites the “Whole Language” movement — a relic from my own school days in the mid-90s) are very much speaking in a language and thinking in a framework that Spencer invented.

I see it now.  As part of my fellowship work with the Rowland foundation, I’ve seen school change proposals that are considered innovative and new and freeing — and are spoken of as new and daring and liberating — are really just echoes of what Spencer was calling for.  Vermont high schools CVU, Stowe, and Lamoille Union have all — thanks to colleagues of mind at the foundation — begun new educational programs that aim to allow students to choose their own educational experiences, often centered on “real-world” activities.  Their justifications sound remarkably like the passages of Spencer that Egan cites on page after page.

Egan heavily critiques Spencer’s ideas, and says that they didn’t work in the 20s and don’t work now.  The reason is that these child-centered theories are based on faulty psychological research, as exemplified by the uber-famous educational idol Jean Piaget, whose theories of development in children Egan believes are too fixed in the stages they trace.  Instead — and here’s where I’m getting a little fuzzy on the argument — Egan thinks that children don’t have set steps in a developmental progression; the cognitive development process is much more complex — with new knowledge we receive actually shaping our minds and influencing what we’re able to learn next.

Egan cites an interesting example: rote memorization of poetry.  Progressives believe this sort of learning is at best ineffective, and at worst cruel and destructive of the creative spirit.  Fine — I’ve heard this argument before from other traditionalists. But Egan thinks that having more information, such as a poem, stored in one’s mind actually allows one to think about the world in a new way.  Having words and even metaphors at one’s disposal actually shapes the way you see the world, and how and what you learn in the future. So . . . memorization is actually good.

If I’m not explaining this well, it’s because a lot of the second half of the book definitely got pretty technical, diving into areas of psychology and cognitive science that I’m not familiar with.  It was a lot to digest, and I’m probably not doing it justice.

What I did take away from this book though was the primacy of Herbert Spencer.  I’m interested in learning more and perhaps reading his work for myself. The way Egan tells it, John Dewey was really echoing the ideas of Spencer, but Dewey, an American and an open-hearted democratic reformer, was the one who American school reformers latched onto, rather than the dead British elitist Spencer.

It seems to me that it’s hard to understand American education without understanding John Dewey.  This book did a great job of showing where exactly Dewey came from, and of fitting the progressive movement he is best known for in historical context.

I enjoyed it.  I’ll be back for a reread soon.