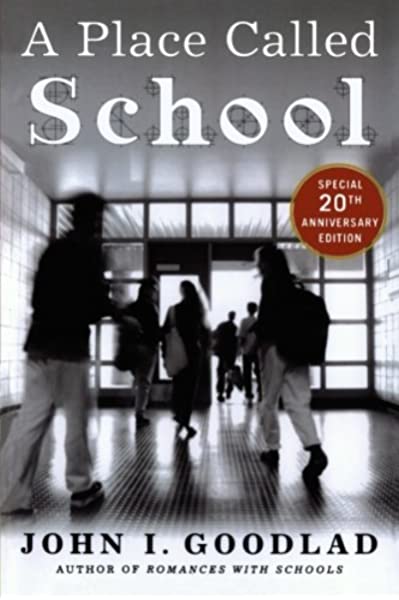 Goodlad’s idea — which be believes would attract more and better teachers — is to have a stratified system of teachers.  At the bottom would be “aides” (which sounds a lot like today’s paraeducators), then several different levels of interns, resident teachers, full-time teachers, and finally “head teachers” who possess doctorates and are responsible for part-time teaching but also part-time professional development and coaching.

Goodlad believes that teachers unions block ideas like this because they insist on “a qualified teacher in every classroom,” a noble-sounding goal, but one which ensures the profession stays “flat,” earning potential is low, and strong teachers have no clear path for advancement.  He also believes that head teachers could take the place of the principal-as-instructional-leader, an ideal that Goodlad believes is ineffective and unrealistic to expect.

He’s not wrong about his.  Having head teachers in the school who are devoted to working with other teachers in a coaching role seems like a very, very good idea.  Many schools do this, to some extent.  But still there is little dialogue among teachers about their own teaching — how to improve it, how to analyze it, how to solve what Goodlad calls “knotty problems” of learning.

In my own formative years, I could have benefited immensely from an experienced veteran working me through some of the hard times I hit early on (as we all do).  I remember several times during my first year of teaching turning to both my principal and to experienced coworkers during tough stretches. But mostly these good soldiers were so busy with their own problems that there was rarely much they could do for me, other than offer some basic advice and encouragement.  I think much of it, beyond the hectic daily schedule of anyone working in a school, comes from the fact that we’re so inexperienced at talking with each other about how to improve our teaching, and frankly, so oblivious most of the time about the workings of our coworkers’ classrooms.  None of those people I went to for help back in my first year had ever been into my classroom while I was teaching (other than my principal).  They had no idea how I was really doing. Why would they have?

Still, I count myself lucky that I’ve had some great informal mentors over the years, who’ve at least been able to talk me through some of the curricular or management questions I’ve had.  A lot of people don’t even have that, and in my experience, you really have to seek it out, especially if the rest of your coworkers are just treading water themselves (which is pretty common).  I think most of us, for most of our careers, agree with Goodlad’s fairly damning assessment of our solitude:

“ . . .  Teachers are very much alone in their work . . .  It is the feeling — and in large measure the actuality — of not being supported by someone who knows about their work, is sympathetic to it, wants to help and, indeed, does help.”

Goodlad’s critique of the flat structure of the profession is a fair one as well.  It’s very possible in many districts to max out the salary schedule just as your are entering mid-career.  I’m 38 and I’ll max out in my district in two years.  After that, it’s just a cost of living bump for the rest of your career — a depressing thought when you’re just entering your forties.

I’ve read ideas about stratifying the levels of professional teachers before.  One great example was J. Lloyd Trump’s innovative and too-this-day-fresh proposal from 1959 called “Images of the Future.” Trump imagines a many-leveled system of educators.  In some ways, it reminds me of higher ed — you’ve got TAs, adjuncts, untenured faculty, assistant professors, associate professors, full-professors.  Or in the medical field, with doctors, nurses, PAs, nurse practitioners, and technicians.  It’s an interesting way to think about education.  Many schools already have some level of stratification: paraeducators and support staff, and sometimes department heads or even instructional coaches.  But usually the flat model prevails.

It’s hard to imagine, though, that you could ever effectively teach by committee or by group.  I remember reading that Jaime Escalante, the famous AP math teacher from California, paid a grader to do all of his grading.  Sounds like a TA in college, but hard to imagine that working at the high school level — students would be thrown off by getting graded by someone who was not the one giving the instruction.  Surely there would be some discrepancies in grading and feedback — or the regulation of this would take quite a bit of communication among the different teachers (enough work to disincentive such a plan in the first place).  Plus, having too many cooks in the kitchen can really complicate preparation and make a teacher’s response to the students before him quite a bit less nimble — as anyone who has team-taught understands well.

It’s hard to imagine how the economics would work, too.  If some group of “master teachers” were to be paid more, that would seem to necessitate that someone would be paid less.  The Trump plan suggests that many teachers would work part-time, like adjunct professors, but we all know the sorts of ills that can breed (e.g., part-time staff are often only part-time committed).

I also keep thinking about what I read somewhere that teaching is a profession marked by such easy entry and low salary potential that teacher turnover is always going to be an issue. That in turn has fueled the rise of the isolated-teacher-in-an-egg crate model; if you’ve got people coming and going all the time, these positions had better be designed to be easily replaceable. If you start offering part-time positions, or partway positions as part of a newly stratified teaching force, you’re going to get even more transience, increasing turnover and upping the challenge of forming the kinds of stable, cohesive teams necessary to running a platoon approach to instruction. Everything about the profession pushes away from teamwork of any kind, away from any kind of interdependence — and back toward a basic everyone’s-the-same, everyone can be plug-and-played model, unfortunately.

So Goodlad’s idea is really interesting to consider, but, as they say, if it hasn’t happened by now . . . it probably ain’t gonna.