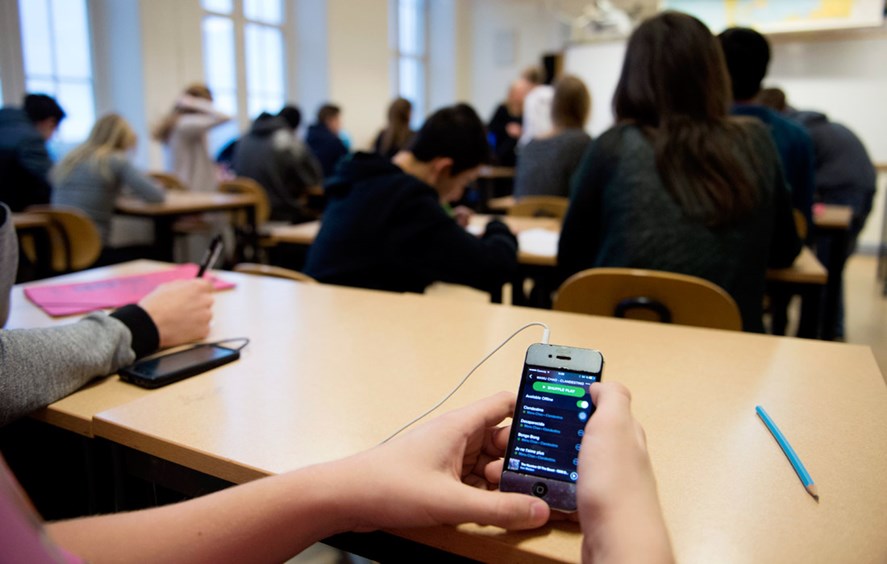 “Excuse me, do you have your cell phone out?” I asked.

“Don’t worry, it’s not what you think,” the boy responded.

I was surprised because even though I fight this battle every day in my other classes, here in my advanced writing class, I had never seen a cell phone.  As I thought about it, even after nearly a year of teaching these 15 juniors and seniors, I had no way of knowing if they even owned cell phones.

In any of my other classes, the ten minutes of directions I’d just given — form groups, choose a book to read together over the next month, then check local libraries or bookstores for copies — would’ve sent at least two or three kids reaching for the welcome distraction of their phones.

“No, no!  I just texted my mom.  She works at the bookstore.  She’s already ordered four copies of the book. We’ll have them in class Monday.”

His phone was already put away.

How the Other Half Lives

Skip ahead to my next class.  Unlike the advanced writers, these students leave no doubt that they all own cell phones.

“Please take a moment to put away your phones,” I cheerfully remind them at the start of class.  I think of myself like the announcement you hear in movie theaters right before the film begins.

“And take your headphones out, too!”

With their discrete wires emerging from sweatshirts and snaking into their ears, my students remind me sometimes of Secret Service agents.  Many of them attempt to conduct their entire lives with one headphone playing music at all times.  How can they concentrate?

“Remember,” I tell them, “to think about those studies we looked at.”

“Those studies” are my first lesson plan of the year — a series of articles about the dangers of distraction: how multitasking is a myth, and how a cell phone sitting on a desk can make us less cognitively astute, and appear less empathetic.  It’s my attempt to kill two birds with one stone: to educate students, and to stop cell phone distraction before it starts.

It usually works for about two weeks.   Then phones creep back onto desks, into laps, and into restless hands.  I spot them during lectures, during writing time, even during group project work.  Some kids are cagey — backpacks or books propped on desks are a telltale sign of illicit phone use.  So are illuminated faces in an otherwise dark room.  So is a strange interest in one’s groin area.  Other kids are more brazen.  Some, despite my friendly tone, are downright belligerent.  Their rebellious tones belie the straight-up lameness of their excuses.

“What’s your problem?  My mom’s texting me!”

But here’s the irony: most of these heavy in-class tech users are completely unable to use technology to help them learn.

Even though they spend — by their own admission — upwards of eight hours a day using media, few of them understand how to follow their progress by checking our school’s online gradebook.

Even fewer of them bother to check their school email, ensuring that they miss their teachers’ email updates about missing assignments and homework changes.

Even more alarming, they struggle to use technology for basic educational tasks: knowing where to find information, how to identify good and bad sources, even understanding what to type into a basic Google search to yield relevant results.  The reasons are not hard to detect. These students lack problem-solving skills, literacy skills, and simple perseverance — ironically all of which are exacerbated by their heavy use of technology. It’s a depressing cycle.

And here’s another problem.  Cell phones also allow family problems to creep into the classroom.  There’s a sad juxtaposition between the young man whose mother ordered books for him and the young man whose mother was texting him with drama-filled invective.  One was helping her son learn. The other was, as some of our students would say, “bringing the drama” — the same sort of familial turmoil that has kept learning a stated priority but in reality a low one in this boy’s life.

The irony of the student whose mother is frantically texting him, “You should be paying attention in class right now!” is all-too clear.

Meanwhile, the students in my advanced class are downright savvy tech users.  They receive automatic updates from the online gradebook, check and respond promptly to their teachers’ emails, and frequently show me new ways of using media for our studies.  Last week, as we discussed Cambridge Analytica in class, one young man removed a cell phone I’d never seen before and demonstrated how I myself could find the covert marketing profile Facebook had compiled on me.

(Apparently I am — like this young man — “Very Liberal.”)

What We’re Up Against

What’s troubling for me is that technology is sold to schools as a way to provide educational equality.  By using online learning, blended learning, and now, “personalized” learning, tech companies promise us that we’ll be able to tailor our teaching directly to individual students in order to close the achievement gap.  But as I’ve described, too often technology only seems to increase the divide between those who’ve been taught to use it wisely and those who haven’t.

Don’t get me wrong.  We’re trying. Like France, which has banned cell phones in schools for students under 15, the school where I work has banned phones for middle schoolers.  And in the high school classrooms, we try to teach not only research skills, but subtler ones too: the dangers of online data sharing, and the dangers of distraction, both in class and in the car.  To some extent, we’re all media literacy teachers. We try.

But we’re up against a lot.  The same tech companies that claim they’re on our side when they’re peddling products to school superintendents are every second fighting for our kids’ attention — and they have a lot sexier products to sell than we educators do.

We’re also up against the first generation of parents who’re on phones.  A few years ago during my annual Open House presentation, I started seeing parents on cell phones.  Here I was, telling a roomful of adults how I’d be educating their children, and they were on their cell phones!  I wanted to quit right there.

Sometimes teachers are no better.  Look around at the next faculty meeting sometime and watch the thumbs working.  We’re just as bad as anyone else at practicing what we preach.

It’s hard because as forward-thinking educators, we want to encourage responsible use of technology.  We know it’s going to be part of our students’ future. And yet, it often feels as if we’re introducing another impediment to learning, especially for our neediest students.  It’s so hard to keep them on task. Too often during a research project, I’ll catch students visiting websites they shouldn’t be on. College professors face this dilemma everyday — to keep kids from taking notes on computers during lectures feels ridiculous in 2018, but then the professor stops talking and everyone’s still typing because they’re actually doing email or posting on social media.  Technology isn’t an educational panacea — it’s a pickle that we’ve gotten ourselves into.

Believe me, I’m not trying to pin all the blame on technology.  Lord knows that kids never needed technology to distract them in class.  We passed notes, we stared at the beautiful girl in front of us, we sketched the rapids on the New Haven Ledges in our notebook (that was me . . . ), or we just zoned out.  The writer and teacher Garret Keizer said that whereas the problem used to be smoking in the boys room, now it’s texting in the boys room.  I suppose that’s a good trade.  But they weren’t smoking in class.  Technology makes it harder to pay attention — especially for the kids who most need to pay attention.

This message is urgent right now, because of the belief that technology can fix our educational problems by differentiating instruction, or — here is the new buzzword in education — by personalizing it.  The allure of hooking our weakest students up to a computer program and letting them work their way through it at their own pace is something that’s becoming more and more seductive.

But it’s naive to think that digital learning can ever replace the true personalization of an experienced teacher.  What if all of our students were savvy about the dangers of the internet?

What if all of our students knew how to leverage the remarkable research and learning tools we didn’t even have just five years ago?

What if all of our students understood the dangers of digital addiction?

What if I didn’t know if any of my students owned cell phones?  That’s the dream.

I don’t know how that happens, but I do know this:  It won’t be computers teaching them that.