Not long after we began dating, my girlfriend found a photo of me with my ex.

But for me — having just ended a 12-year relationship that began when I was 18 — “Who’s that?” was a new and terrifying question.

But all at once, I felt a wave of calm wash over me.  Suddenly it all made sense.  Suddenly I knew exactly what to say.

First, I should tell you that my ex was not a woman (or a man).  In fact, during our twelve year relationship, I was almost always single.  How can that be?  Well, it’s hardly surprising.  I lived in what was basically a frat house with three other guys.  I ate a ton of take-out, watched sports non-stop, cut my own hair, bought clothing based solely on how quickly it dried, checked the Weather Channel obsessively, took my “showers” in the Potomac River, knew more about meterology than most weather-casters, and owned 11 kayaks (nearly all of which were indispensable when you thought about it).  For twelve years I was a competitive whitewater kayak slalom racer — better known as a “kayak bum.” I did have vague ambitions: I wrote a book about kayaking, trained for (and missed) two Olympic teams, and kayaked many of the nation’s most dangerous rivers — the type of rivers that make people pull over in their cars and yell down, “How much life insurance do y’all carry, anyway?” I didn’t care about meeting women.  I cared about lapping Great Falls of the Potomac five times before dark and then drinking PBR with my buddies and bragging about who had a better line off the 20-foot waterfall.  I cared about keeping my boat inches away from slalom gates in the midst of huge rapids at the bottom of deserted river valleys in North Carolina and New Hampshire, trying to shave precious milliseconds off my time for the chance of representing my country in international races.  I didn’t need women.  I was already in a committed relationship — with kayaking.

But the year I turned 30, things soured between us.  A good friend, just 28, drowned on a river we both knew well.  I looked up and realized that in five years, I’d lost more than a dozen friends to the sport.  One time, I was there.  Other times I had just been there the day before.  Still others died on rivers I’d done a hundred times myself.  Kayaking was too dangerous; the fun wasn’t worth it.  The old spark was gone between us.  It was time to have The Talk.

After we broke up, I struggled to move on.  I flirted with hiking and spent time with skiing, but it wasn’t the same.  By spring I found myself thinking a lot about my ex.  I missed the way a hard river trip brings strangers together.  You’re in it together, you’re facing real danger, you’re watching each other’s backs.  You kayak a class V river with someone and it’s an incredibly tight bond.  I missed it.  I wasn’t part of the group,  I wasn’t on the cutting edge.  I wasn’t in the latest pictures on Facebook.  Kayaking had moved on without me.  Kayaking had found someone new.

But just as I was seriously thinking about calling my ex, a funny thing happened: I met someone new.  She was beautiful, accomplished, and fun — the kind of woman I never met back when I was jobless and had a weird life jacket tan and a car that smelled like wet river socks.

On one of our first dates, I took her hiking.  It was spring and when I got home, I had messages from my old crew: “The river’s running!  Meet in an hour?”

But I didn’t get back with my ex.  I moved on.  Two years later, now I’m engaged to that same woman, and and I’m happier than I ever was with kayaking.  I’m in such a good place that sometimes I even go visit my ex at the river.  But we’re not in danger of getting back together.  We’re just friends.

Is my fiancee okay with this?  How much did she know about my ex?  And what happened when she asked me, “Who’s that?”?

First of all, my fiancee learned pretty early on about my ex.  For instance, there had been the moment when I’d had to show her my garage: instead of a car inside, there were seven kayaks and enough waterproof gear to outfit a fire department.

Then there was my Facebook message feed, which she must have seen — and a quick scroll of which revealed harrowing point-of-view videos by young, tattooed guys yelling things like “Let’s fire it up!” and paddling their kayaks off building-sized cataracts with names like “Go Left and Die” and basically surviving and many of these videos included personalized messages addressed to me:

Or, “Remember when you almost drowned here?”

Then there were some strange moments when my girlfriend and I happened to run into my old boating buddies on the street.  (“Um, who was that guy with the weird goatee, and why did he ask if you still have his skirt?”)

But the moment of truth came not long after we met.  My then-girlfriend found the picture of me with my ex.  She was thumbing through a book I once wrote about my love affair with rivers when she paused at a photo of a kayaker soaring off a waterfall.

But by then I knew exactly what I wanted to say.

“It was,” I said, looking at the stranger in the photo.  “But not anymore.” 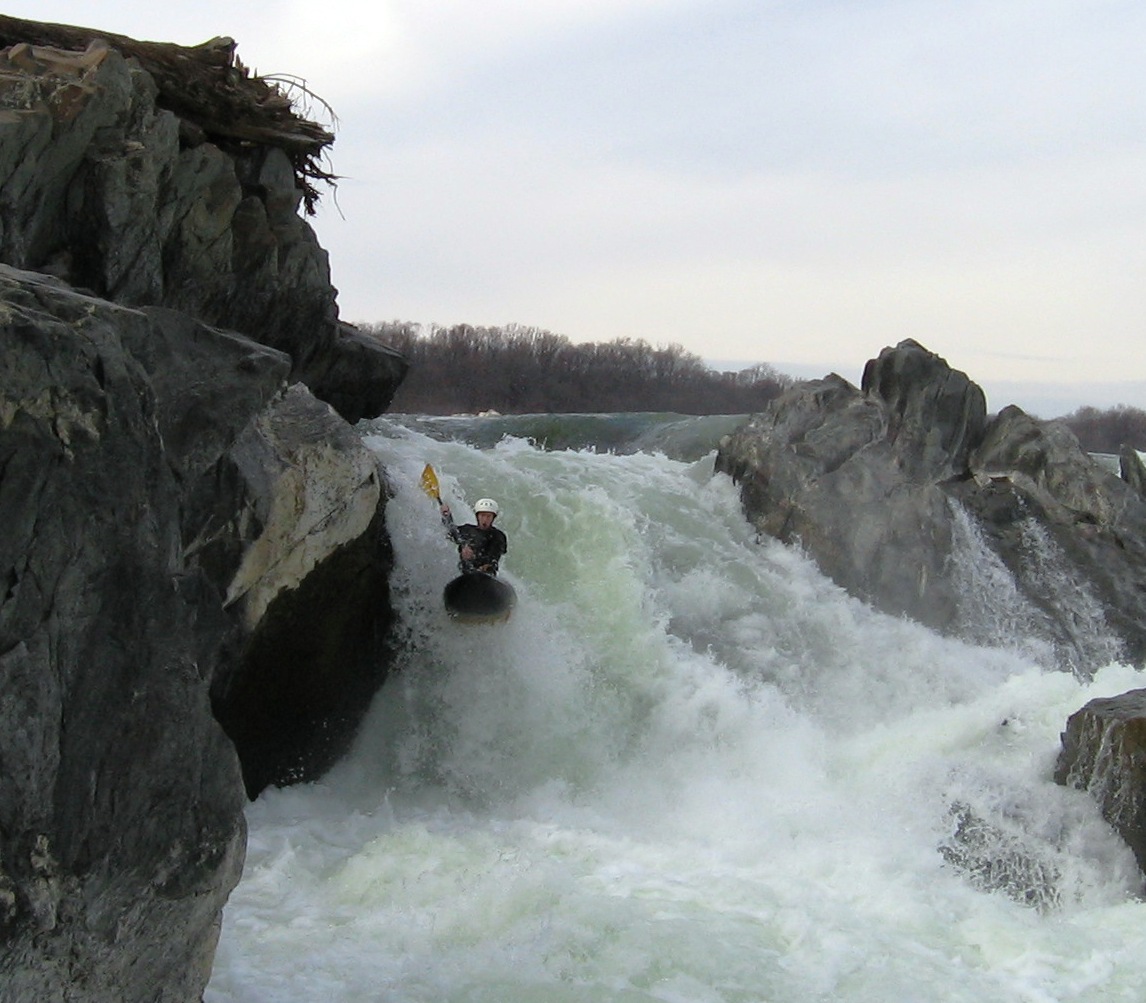